To say Osakans are a proud bunch would be quite the understatement. Osaka is Japan’s second largest city and is home to Japan’s best comedians, loudest people, most obsessive baseball fans and many would say best food. If Tokyo is the face of Japan, Kyoto is the soul and Osaka is the heart. Although in many areas Osaka doesn’t really compare to its larger more cosmopolitan sibling, it has an undeniable charm and bravado that wins the hearts of many visitors to Japan and is often the envy of other Japanese cities.  Having lived in Osaka on and off for fifteen years I can testify that it is indeed this charm that has kept me from straying to other areas of Japan.

When it comes to sake too, Osakans are fiercely loyal. Ask anyone in Osaka about local sake and you’ll usually get one of two replies: Goshun or Akishika. Goshun is the stalwart found in almost every tachinomi, izakaya and bar around town. Working man’s sake made old school for the old school. But Akishika is the young up and comer (with 130 years experience) gracing the bars of any self respecting sake dedicated venue in town, and their popularity stretches well beyond Osaka and Kansai. Located in Osaka in the Nose (no-seh) area of Northern Osaka only just inside the prefectural borders, Akishika have built themselves something of a reputation for doing things their own way. They grow a lot of their own rice organically (including the only Omachi fields in Osaka, a notoriously difficult rice usually found mostly in Okayama), steer clear of fine filtering and are one of only a handful of breweries to produce only junmai sake.

President/toji Oku-san sees Akishika as more than a sake producer, for him being a rice grower and a sake brewery are one in the same with one no more or less important than the other. In fact originally known as Okushika the Oku family were rice farmers who made a bit of sake on the side with their product. This would help to explain Oku-san’s approach of not interfering with the rice and keeping human intervention to a minimum throughout the whole “grain to bottle” process by not doing anything unnecessary  While most breweries strive for consistency in flavor profile year in and out Oku-san appreciates that every year’s rice harvest is different and they aren’t afraid to tweak their production methods to work in harmony with the condition of the rice rather than fight and manipulate it to maintain the same character as previous years. While they haven’t exactly embraced the idea of vintages as used in the wine world they are comfortable with the concept of variance in their sake from year to year. Having said that there are definite consistent traits seen in Akishika sake regardless of the rice harvest. Known and loved for their low-aromatics, high acid, punchy sake,  Akishika is what would normally be described as food friendly sake. Cheese and other fermented, umami-rich foods like natto and miso laden foods work particularly well. Despite their popularity with the sake geek crowd however they are still quite a small brewery producing just under 1000 koku (180,000 litres) leaving precious little to get beyond the borders of Kansai.
Fortunately for the locals  a bit of Akishika is never hard to come by so I recently enjoyed a selected line up at a local soba restaurant where Kotaro Oku-san (the president/toji’s son) was kind enough to give a guided tour of Akishika’s flavours and range.

The two year aged junmai daiginjo (less than 400 bottles produced) in their now obsolete retro labeling was an interesting representation of the mellowing aging effects on  a more delicate sake. Although it retained the light body and had arguably developed some interesting complexity in the honeyed aromas and nutty profile I couldn’t help but wish I could have tried it fresher. 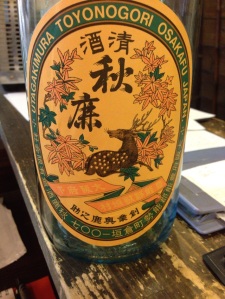 The current release Hiyaoroshi was a textbook example of Akishika acidity backed with peppery finishing notes and lead with a mild aroma of melon and herbs.

Likewise the 80% milled junmai was a fantastic showing of their home-grown organic yamadanishiki. Showing almost no aromas the palate was rich, full and broad and worked wonderfully slightly warmed above room temperature revealing the chewy rice flavours. The kimoto junmai made again with their own omachi rice was bursting with koji aromas of chestnut, no real fruity aromas and the trademark zippy acidity and a slight sweetness. One of their more visible brews, their junmai ginjo genshu with its distinctive cartoon label is again a classic example of what the Akishika fans want. Grainy rice mouth feel balanced with an assertive, lip-smacking acid profile. Clean aromas but not overtly ginjo-esque. Incidentally, the cartoon label also appears on other Akishika labels as an ink stamp indicating  the sake was made using their own-grown rice.

An exciting brewery finely balancing the line of keeping up with a modern market while maintaining an old-school approach and work ethic. Worth keeping an eye out for them in anywhere around Kansai or waving the Osakan flag anywhere serious sake is found.