I love hearing the success stories of breweries that re-invented themselves to take on the new world. Many of the sake brands you see on the shelves and on menus were not around 10, 20 years ago. The breweries were, but the label may not have been. A lot of breweries put aside their old monikers and rebranded at the same time they decided to change strategy, in terms of marketing as well as production. One story that stands out is the success of Tochigi brewery Senkin.
Established in 1806, Senkin are actually the oldest brewers in Tochigi. However, it was the forward thinking of the 11th generation Usui brothers that saw them shift into a the cult brewery they are today. Around 11 years ago Kazuki Usui decided that if Senkin were to survive into the new era they needed to change tact in a drastic way. And change they did. With something of a re-launch in 2008 Senkin hit the market with their unique, stand-alone sake of full-bodied sweetness and high acidity marketed to match well with cuisines other than Japanese. To further distinguish themselves from other sake they decided to completely shun the ubiquitous sake rice king Yamada Nishiki, instead opting for the more peculiar Kame no O, Omachi and Aiyama, now even going so far as cultivating a lot of the rice themselves. They are also one of only a handful of breweries that doesn’t dilute their sake with water (genshu). Usually that would be a warming bell of a high-octane alcohol bomb but in the case of Senkin it is about tapering off the brewing process at just the right moment to achieve the desired alcohol content which also provides the natural sought after sweetness of Senkin’s style. If that wasn’t enough, as of 2011 Senkin decided to do away with Tokuteimeishoshu (special designation) labelling. According to the brothers, the labelling of Ginjo, Junmai, Tokubetsu, Daiginjo etc. succeeded in nothing more than confusing the consumer. If a sake is made with rice milled to 50%, in theory, it could be Daiginjo or Tokubetsu or even Junmai. They figured they’d just tell people what’s in the bottle, how they made it and forget about grades. A very interesting and refreshing approach. Personally, I think they could be onto something…
Naturally, when sake with high acidity is the goal, Yamahai and Kimoto style sake feature quite prominently in the Senkin line-up. The prevalence of naturally occurring bacteria in the brewing process of these styles are known for resulting in tangy, acidic flavour profiles. Also all brewing is conducted using wooden tanks as opposed to the common use of enamel tanks to give something of an “old-world” feel that paradoxically sets them apart as new age “slow” brewers.
A great place to start with Senkin is their “Classic” series. A selection of sake of various seimaibuai, rice varieties and style with the purpose of showcasing the rice variety and or the style eg. kimoto/yamahai.
仙禽 山廃クラシック Senkin Classic Yamahai
Tochigi Prefecture
Seimaibuai 80％
Rice: Kame no OThe Classic Yamahai brewed with Kame no O rice at a rugged 80% seimaibuai is simply one of my favourite sake. Best at either room temperature or slightly warmed, the classic yamahai shows voluptuous aromas of caramel, black cherry, and marron. On the palate it delivers a chewy, umami-rich, rice sweetness balanced with that trademark Senkin tang. I’ve made no secret of my love for Kame no O rice and this is the perfect kind of vehicle to show the depth of character this rice can show. 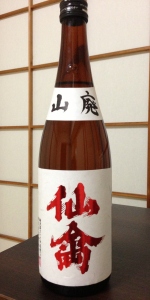 The balance of traditional methods with practical approach and the unwillingness to compromise has placed Senkin on stage as one of the true rock stars of the sake world. An act worth following.